Mangaluru, Dec 29:The death toll of cattle affected by lumpy skin disease has crossed 23,000 in the state after 286 deaths of LSD cattle were reported on a single day during the last year end .

The healthy cattle get infected from house flies and mosquitoes and it has been difficult to control the spread of the infection. The infected cattle experience fever with boils, pimples and lumps are seen in their bodies. Cattle which get wounded take a long time to recover and the infection spreads to various organs affecting the body and also reducing the milk output. 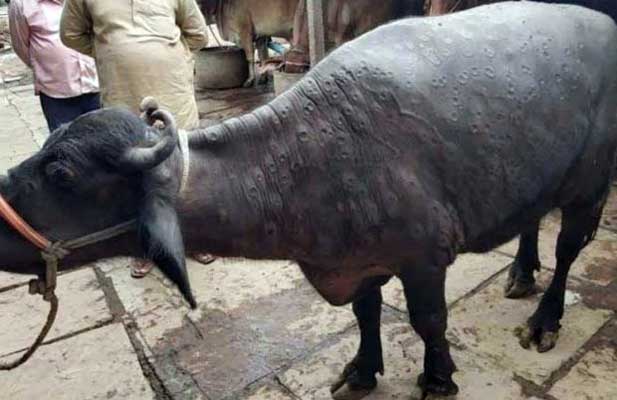 The infection can be cured with immunity boosters and just like Covid-19 infection the virus gets mutated and there is no vaccine against lumpy skin infection. Calves are administered vaccines that are given to goats and sheep which give the cattle cross immunity.

Even after administering the vaccines, the infection is present but the intensity is lower. There is a ban on inter-district transport of cattle but mosquitoes which draw blood from the cattle are the infectors. Cattle need to be treated as soon as symptoms are reported. Control of mosquitoes and administering of vaccines are some of the precautionary steps taken to control the disease from spreading, according to Dakshina Kannada deputy director of Animal Husbandry department Dr Arun Kumar Shetty N.

Incidences of lumpy skin disease are being reported in the coastal district of Uttara Kannada, North India and now in Dakshina Kannada and Udupi districts. In 26 days, 2,964 cases have been reported from 273 villages and 54 cattle have died.

In Udupi district, As many as 2410 cases have been reported and 10 of them have died while 2,880 of them are undergoing treatment.

Express News Service ARIYALUR: A spurt in cattle head reporting lumpy skin disease symptoms over the past few weeks has...

Sindh Livestock Department has developed vaccine for lumpy skin disease (LSD) which would massively cut cost required for import of...

Lahore: The chief minister has launched a province-wide vaccination campaign to prevent the second possible wave of lumpy skin disease...

According to a government notification issued here today in this regard, the declaration has been made in exercise of powers...