Panchkula has observed a sudden spike in lumpy skin disease, surfacing among cattle in the last 48 hours. The district’s active tally has now gone past the 700 mark to 761. Seven bovines have been reported dead till now. The disease is a severe threat to cattle as 203 new cases were reported on Wednesday, almost a four-fold rise since August 15.

The district’s active case tally breached the 200 mark for the first time in a single day on Wednesday and consecutively crossed the 175 mark for the second day with a total 382 cases and three deaths being reported in last two days. A total of 213 bovines in the district have recovered from the infections.

As per the data shared by the Animal Husbandry Department, a total of 761 cases diagnosed have been identified across 109 villages in the district and 182 have been reported from eight gaushalas. The disease has mainly affected cows comparatively more than the buffalo population as only three buffaloes are infected with the virus in the district. 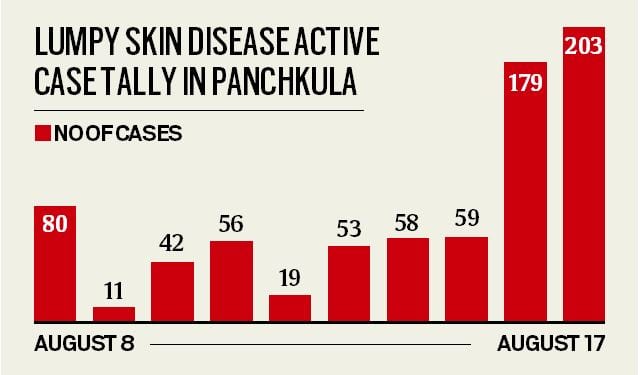 The disease has mainly affected cows comparatively more than the buffalo population as only three buffaloes are infected with the virus in the district.

Talking To The Indian Express, Deputy Director, Department of Animal Husbandry, Panchkula, Dr Anil Banwala stated, “The vaccination drive has been initiated after we received the goatpox vaccines which are also effectual for treating lumpy skin disease, as both are genetically related to goatpox and sheeppox virus family. We had sought 20,000 doses but have only received 9,100 so far. Our first priority is to administer the doses to healthy cattle above four months old to immediately immunise the cattle and neutralise further spread”.

On account of countering further spread, the department has issued fresh advisory and guidelines prohibiting the transport of cattle with immediate effect. “A total of 15 teams have been constituted to monitor the situation and collect samples, conduct awareness drives in affected areas on precautionary measures while handling the diseased animals. Some of the advised precautionary measures include wearing gloves and masks, using sanitisers, isolating the affected cattle immediately and informing the veterinarian,” Dr Banwala.

The department has also sent 17 samples of the infected animals to the National Institute of High Security Animal Diseases (NIHSAD) based in Bhopal, results of which are awaited.

Milking and extracting milk products from affected cattle will be appropriate for human use after the process of boiling and pasteurisation as it kills the virus, added Dr Banwala. As per the 20th livestock census in 2019, there are an estimated 1,05,871 livestock in the district of which 32,576 are cows.

The symptoms of the disease include appearance of circular nodules or lumps over the skin of the animal, high fever, weight loss, lesions in the mouth, excessive nasal and salivary secretion from the mouth and nose.

Since the beginning of the year, chickenpox has infected around 4.2 thousand people in Bishkek