Some 1,229 cattle across five districts of Gujarat have been infected with Lumpy Skin Disease (LSD), an infectious viral disease, in the past one month. Some 39 of the animals have died, according to data shared by district Panchayats with the state’s animal husbandry department recently.

Six cows have died in Kutch district, eight in Jamnagar, 21 in Dwarka and four in Porbandar, according to the data.

Read Down To Earth’s coverage of lumpy skin disease

The LSD epidemic started in Dwarka and Jamnagar districts. They are also the worst-hit.

One of the oldest cattle shelters in Dwarka is the Dwarka Gaushala, which is 135 years old and had almost 70 cows till recently.

“Half of the 70 were infected. Five died. The others have been treated and have shown improvement and have started eating. LSD-infected cows stop eating. They experience tiredness and tears flow continuously from their eyes,” Paresh Jhakharia, a volunteer at Dwarka Gaushala, told this reporter.

Symptoms of LSD primarily consist of fever, fluid excretion from eyes and nose, dribbling of saliva from the mouth and blisters on the body. The animal stops eating and faces problems while chewing or eating, resulting in reduced milk production. If an animal is pregnant, the calf dies.

The administration has taken steps to rein in the epidemic. The data pointers shared by the animal husbandry department said preventive measures such as isolation and treatment of affected animals, vaccination, vector control on the premises and awareness were being taken.

“We had conducted a telemedicine session for a cow shelter in Kutch, where veterinary doctors from Karnataka and Odisha were consulted. They who advised us to prepare an Ayurvedic paste and apply it on infected cows along with administration of allopathic medicines,” Vallabh Kathiria, ex-president of the National Kamdhenu Commission and current member of the Lok Sabha from Rajkot constituency, said.

Kathiria visited a cow shelter in Kutch, where 1,000 cows are kept. He said, “There were some 12-15 cows, which had symptoms of LSD and were kept in isolation. Hence, the spread of the disease was not as intense as in other districts.”

He added that vaccines were the only cure to an LSD epidemic. Hence, substantial measures to vaccinate cattle were being taken. 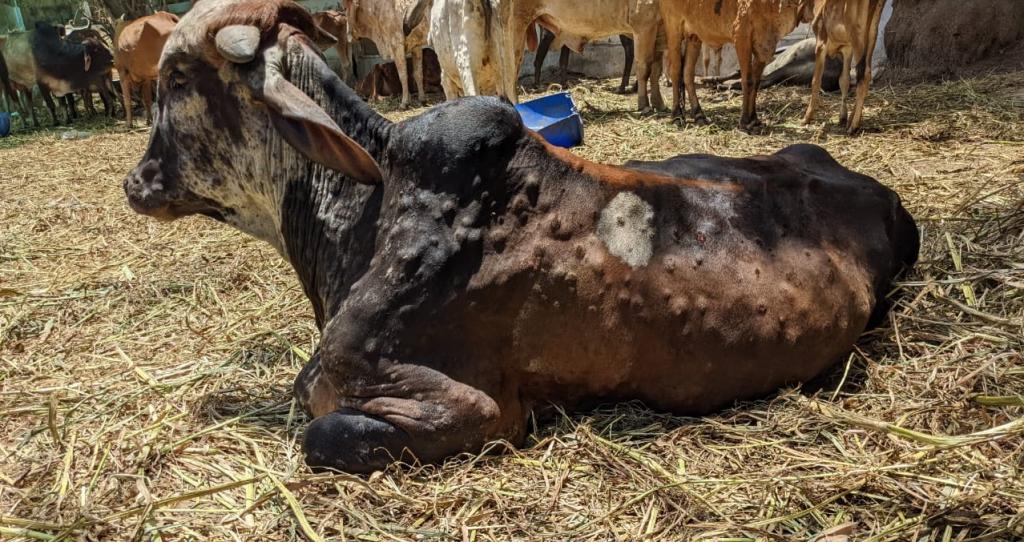 “A vaccination drive is being carried out in a five kilometre radius across infected areas across Gujarat, in accordance with central guidelines,” a senior official from the animal husbandry said on the condition of anonymity.

Citizens are helping out too. Chaitanya Bhateliya, a local resident, gave details about LSD to residents. He also informed the authorities, whenever an infected animal died.

“Things are improving. Citizens have become vigilant. They immediately inform the authorities whenever they see an infected animal,” Bhateliya said.

“Procurement of cow milk has not been affected due to the LSD epidemic, as the impact in terms of percentage or numbers of cattle affected is not big and timely measures have helped stem the epidemic,” a senior official from the Rajkot-headquartered Mahi Milk Producer Co Ltd, said.

We are a voice to you; you have been a support to us. Together we build journalism that is independent, credible and fearless. You can further help us by making a donation. This will mean a lot for our ability to bring you news, perspectives and analysis from the ground so that we can make change together.