Lumpy skin disease: Can the virus transmit from cattle to humans? Is milk safe?


Lumpy Skin Disease is a viral outbreak that targets cattle and has governments across India on edge. Research is underway to understand if it can transmit to humans. 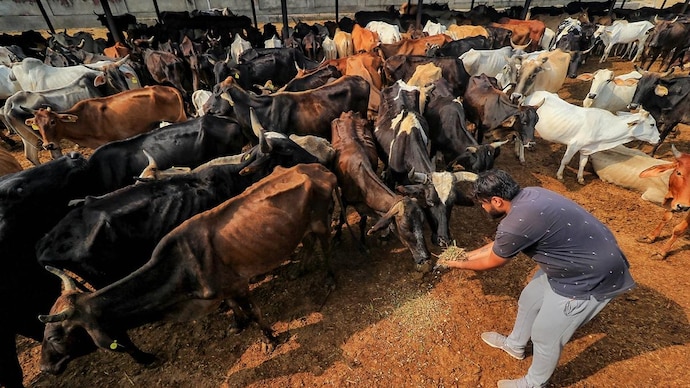 By Tirtho Banerjee: Does the Lumpy Skin Disease (LSD) virus get transmitted from cattle to humans? Is the milk you drink safe enough?

Indian Council of Medical Research (ICMR) scientists are carrying out a study to find out if there is any possibility of transmission of the lumpy skin virus, which has killed over 65,000 cattle in India, to the human population. Samples of cattle heads infected by the dangerous virus have been collected for tests. The tests will also find out that if you consume the milk of infected cattle, would you get infected?

You neednt worry much, though, because till now, even as there are 1.5 million reported cases of lumpy virus across 18 states in India, theres no evidence to prove any cattle-to-human transmission.

Experts from Guru Angad Dev Veterinary and Animal Sciences University recently quelled the fear when they said that such cattle-to-human transmission of the lumpy virus doesnt happen, its all a myth.

Also Read |What is Lumpy Skin Disease that has killed over 50,000 cattle across India?

Dr. Jasbir Singh Bedi, Director, Centre for One Health, reportedly pointed out that the virus doesnt infect humans through direct contact or due to consuming the milk of affected animals. However, he underlined that milk should be boiled before you drink it. So, is pasteurized milk better than unpasteurized milk?

Indian Veterinary Research Institute (IVRI) Joint Director Ashok Kumar Mohanty told PTI: It is safe to consume milk from the infected cattle. There is no problem in the quality of milk even if you have it after boiling or without boiling.

A scientist from ICMRs Indian Veterinary Research Institute (IVRI) in Bareilly was reportedly quoted as saying that if the calf consumes the raw milk of the infected cow, then it may contract the virus.

It is also imperative that the dead animals are properly disposed of.

Most scientists express a consensus when they say that the lumpy skin disease doesnt apparently have a zoonotic link, ruling out its transmission from animals to humans. However, since the disease has seen an unprecedented spurt, they want to dispel all doubts from the minds of people mostly the vets. The ICMR study comes after the scientists were prodded by the vets to carry out the research.

By October 7, IVRI researchers had tested 850 samples, and 300 of them were found positive. However, there was no proof that the lumpy virus could infect humans too. Only buffaloes, cows, goats, and sheep are affected by the disease.

HOW IT POUNCES ON VICTIM

The lumpy skin virus can be traced to the genus Capripoxvirus, from the same family as the smallpox virus and monkeypox virus (Poxviridae).

The virus is transmitted by blood-feeding insects like flies, mosquitoes, wasps, or ticks. Its initial symptoms are fatigue, fever, and lymph nodes in the body. Later, it affects the infected cattles immune system and then, hits its respiratory organs. Miscarriages have been found in infected animals. Besides, the milk yield also plummeted.

An FAO study revealed that the economic fallout of lumpy skin disease for south, east, and southeast countries is around $1.45 billion in direct losses of livestock and production.

Changes in wind velocity and directions as well as incessant rainfall and the humid weather, which brought in more vectors, have been the contributing factors of the disease this year.

Also Read |Heavy rains in October are due to this phenomenon, not monsoon

It was exactly two months back on August 10 that Union Minister for Agriculture and Farmers Welfare Narendra Singh Tomar launched an indigenous vaccine called Lumpi-ProVacInd to protect livestock from the lumpy skin disease. The vaccine has been developed by the National Equine Research Center, Hisar (Haryana) in collaboration with the IVRI, Izatnagar (Bareilly). Earlier, the goat pox vaccine was being administered to cattle.

The coming month would be an acid test for the vaccine when it is commercialized. There are many challenges ahead and it is hoped the Lumpi-Pro VacInd vaccine would save our cattle and stem the menacing toll.

Lumpy skin disease: Can the virus be transferable to humans? Is milk safe to drink? | Health News