Hemorrhagic Meningitis Due to Varicella-Zoster Virus: A Case Report With Clinical, Cytologic, and Radiologic Correlation

Varicella-zoster virus (VZV) is known to affect the central and peripheral nervous system in a protean manner [1,2]. In immunocompromised patients, meningitis and myelitis may have atypical presentations and require a high index of suspicion for timely diagnosis [2]. VZV vasculopathy commonly affects large vessels and is associated with ischemic or hemorrhagic infarct [3], aneurysm, and intracranial hemorrhage [4]. When described, subarachnoid hemorrhage occurs in the setting of hemorrhagic infarct [5] or multifocal intraparenchymal hemorrhage [6]. Conversely, hemorrhagic meningitis manifesting predominantly as subarachnoid hemorrhage is poorly described in the literature. Here, we correlate the clinical, cytologic, and imaging findings in an immunocompromised patient presenting with hemorrhagic meningitis, multidermatomal zoster, myelitis, and neurapraxia.

A 53-year-old man presented to our emergency department with 10 days of painful right leg rash and intermittent fevers. Pertinent background history included dermatomyositis complicated by polyarthritis and interstitial lung disease, treated with tacrolimus and mycophenolate and 25 mg prednisolone. He had recently ceased intravenous cyclophosphamide treatment. He was a non-smoker, with no history of hypertension, excess alcohol consumption, diabetes, or bleeding diatheses, and was not on antiplatelet or anticoagulant therapy. Human immunodeficiency virus status was negative. There was no documented history of VZV vaccination. Examination revealed a unilateral vesicular rash with confluent lesions and crusting along the L4 and L5 dermatomes of the medial right leg (Figure 1, Panel A). A positive VZV polymerase chain reaction (PCR) swab confirmed herpes zoster, and intravenous acyclovir was commenced. Prednisolone was continued, and tacrolimus and mycophenolate were withheld. 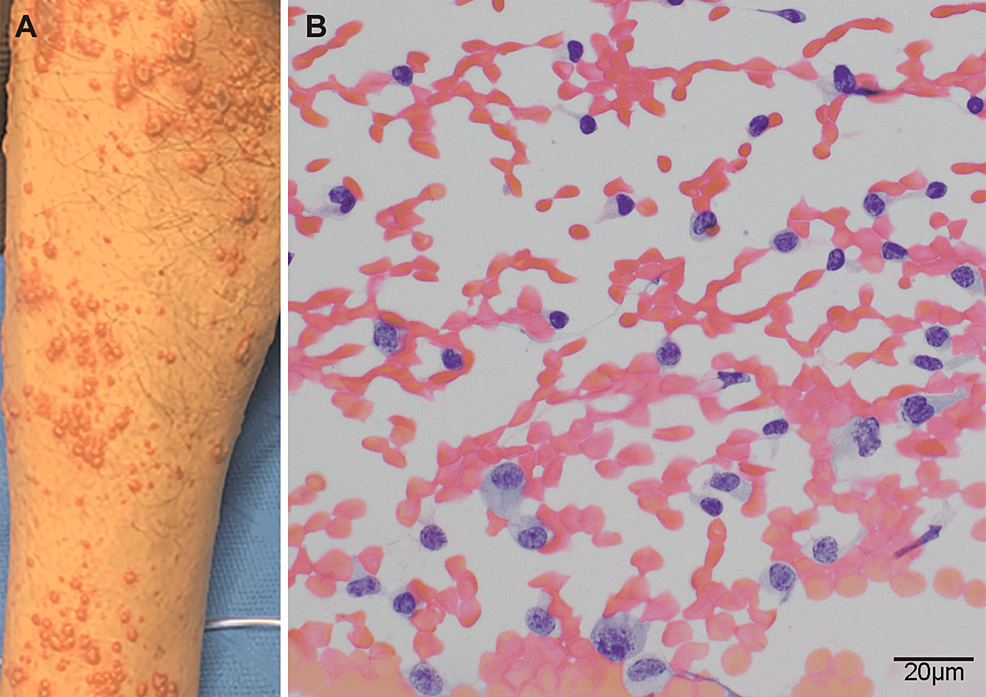 A. Clinical photograph of the right leg demonstrating the typical vesicular rash of herpes zoster, with erythematous nodules and confluent lesions with crusting. 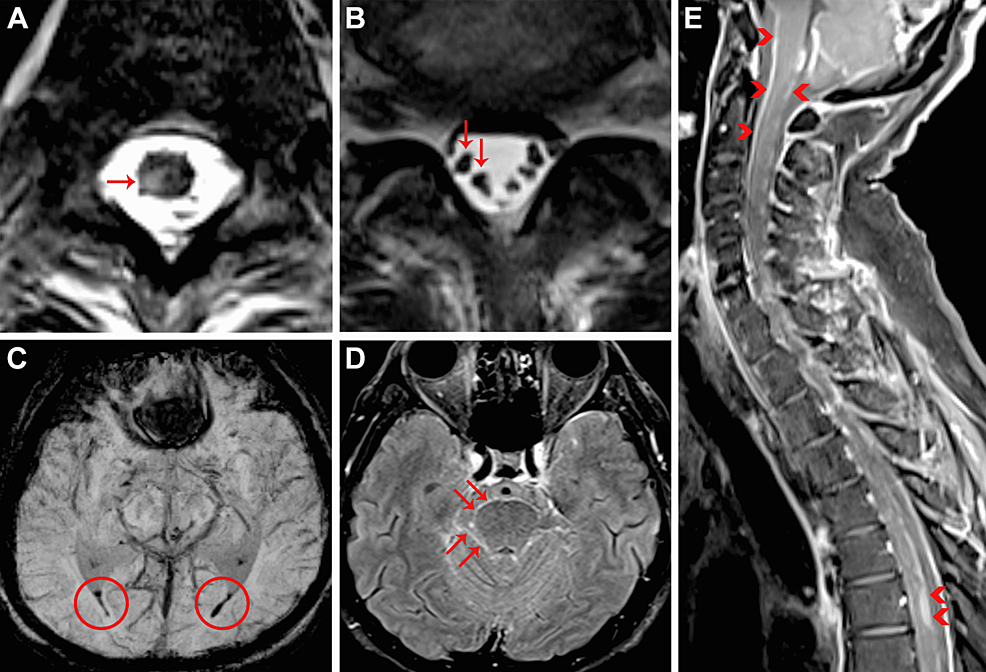 The CSF protein was elevated, and CSF glucose was at the upper limits of normal, with an elevated white cell count and markedly elevated red cell count (Table 1). CSF PCR detected VZV DNA, without evidence of other infectious causes. An 18F-fluorodeoxyglucose positron emission tomography/computed tomography study did not detect evidence of occult malignancy.

The unifying diagnosis was of disseminated zoster with hemorrhagic meningitis, myelitis, and neurapraxia. Intravenous acyclovir was continued for a total duration of three weeks, and pregabalin was added for the treatment of neuropathic pain. The zoster lesions crusted over and resolved. The patient’s leg weakness improved after several months of rehabilitation to his baseline of symmetric weakness due to dermatomyositis. However, his post-herpetic neuralgia persisted at the one-year follow-up.

The pathologic hallmarks of VZV include ganglionic hemorrhage, necrosis, and inflammation; demyelination can be seen with mononuclear infiltrates and microglial proliferation [7]. Detection of herpesvirus particles, Cowdry A inclusions, and multinucleated giant cells in involved tissues confirms viral invasion [4].

Meningitis and other CNS complications arise in a retrograde manner from infected dorsal root ganglia [2]. CSF cytology reveals lymphocytic pleocytosis [2], as evident in our case. Anti-VZV immunoglobulin G has been described as more robust than viral DNA PCR which disappears after early infection [2,6,8]. Post-gadolinium fluid-attenuated inversion recovery MRI sequences may demonstrate leptomeningeal enhancement with 80-90% sensitivity, attributed to pathogen-induced blood-brain-barrier dysfunction and leakage of blood-borne proteins into CSF [9]. Although imaging is not required to diagnose meningitis, it plays an important role in the assessment of complications including myelitis and vasculopathy.

VZV myelitis may occur via direct infection, vasculopathy, or as a post-infectious phenomenon, and may be fatal in immunocompromised patients [2]. MRI features of VZV myelitis include focal signal hyperintensity on T2-weighted sequences and intense gadolinium enhancement in the dorsolateral spinal cord; often at a corresponding level to the dermatomal rash [1].

Subarachnoid hemorrhage is a rarely described complication of VZV infection. A recent literature review identified ischemic stroke, intracerebral hemorrhage, and venous sinus thrombosis as the most common cerebrovascular complications following VZV infection [8]. Intraparenchymal hematoma with coexistent subarachnoid hemorrhage has been described and attributed to VZV vasculopathy [5,6]. VZV vasculopathy causes a large-vessel vasculitis [3], resulting in isolated or multifocal ischemic infarcts, [6] dissection, aneurysm, or stenoses of the terminal internal carotid artery or proximal circle of Willis [1]. However, CT angiography was normal in our case. No infarct, aneurysm, or vessel wall enhancement was detected on MRI. In the setting of superficial siderosis and nodular leptomeningeal enhancement, a hemorrhagic form of meningitis was considered most likely.

The pathogenesis of subarachnoid hemorrhage in our case could be due to a direct neurotropic effect as hemorrhagic necrosis is a hallmark of zoster [7]. Alternatively, small-vessel inflammation representing a form of small-vessel vasculopathy could be entertained [4]. Although ventriculitis is a described complication of VZV [3], it would not account for the extraventricular nodular leptomeningeal enhancement seen in our case.

Prompt treatment with steroids and intravenous acyclovir remains the first-line therapy for CNS complications of VZV [6]. The minimum suggested duration of therapy is two weeks, although immunocompromised patients may benefit from a longer treatment course [2]. Further prospective research is required to better inform treatment duration and dosing.

Our case report adds hemorrhagic meningitis to the spectrum of complications of VZV reactivation, providing clinical, cytologic, and radiologic correlation. The disseminated pattern of disease in our case also included multidermatomal zoster, myelitis, neurapraxia, and post-herpetic neuralgia. In immunocompromised patients presenting with zoster, early empiric antiviral therapy and expedited investigation for disseminated infection are essential. Although gadolinium-enhanced MRI of the entire neuraxis is a useful tool to assess for disseminated disease, CSF analysis remains the gold standard for diagnosis of CNS involvement of VZV.

To explain how he came to be in late October standing inside Wembley Stadium wearing a Giants blue Saquon Barkley...