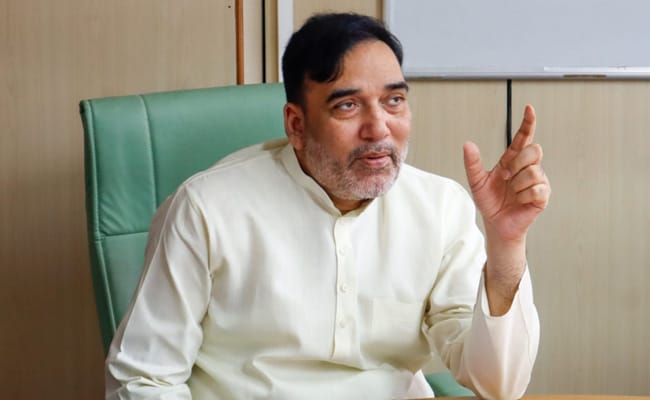 Development Minister Gopal Rai said 173 cases of the disease have been found among cattle in Delhi.

The Delhi government will purchase 60,000 doses of goat pox vaccine to inoculate healthy cattle in the capital to prevent the spread of lumpy skin disease.

These vaccine doses will be administered free of cost.

Development Minister Gopal Rai on Saturday said that 173 cases of lumpy skin disease have been found among cattle in Delhi, mostly in the southwest district.  This is for the first time that the Delhi government has reported cases of lumpy skin disease in the city.  A senior official said there has been no increase in the cases since last evening.No death has been reported so far.

“Delhi has a cattle population of 80,000. The central government which is finalising the rate contract with the supplier has assured that 60,000 doses will reach us soon,” he told PTI.

“We had a meeting with officials of the Department of Animal Husbandry and Dairying on Saturday and requested them to make the vaccine available as soon as possible,” the official said.

The government will adopt the ring vaccination strategy in which healthy cattle in a 5 km radius of the affected areas will be given goat pox vaccine with the Uttarkashi strain of the virus, he said.

Lumpy skin disease is a contagious viral disease that spreads among cattle through mosquitoes, flies, lice and wasps by direct contact, as also through contaminated food and water. It does not transmit from cattle to humans.   The symptoms include high fever, reduced milk production, skin nodules, loss of appetite, increased nasal discharge and watery eyes, among others.

According to the Centre, the disease has spread in Gujarat, Rajasthan, Punjab, Haryana, Uttar Pradesh and Andhra Pradesh and more than 57,000 cattle have died due to it.

In Delhi, most cases of lumpy skin disease have been detected in the Goyla dairy area, Rewla Khanpur area, Ghumanhera and Najafgarh.

The city government has also set up a special control room with helpline number 8287848586 for queries related to the disease.

An isolation ward has been set up in Rewla Khanpur Gau Sadan in southwest Delhi for stray cattle suffering from lumpy skin disease, Rai said.

The cow shelter can accommodate 4,500 cattle. The isolation ward has been set up away from healthy cattle and mosquito nets have been installed there.

Experts said the disease is unlikely to spread in Delhi to proportions seen in other states as the number of cases is low and manageable.  They said the virus doesn’t normally lead to the death of cattle and the mortality rate is just one to two per cent.

The high number of deaths in Rajasthan and Gujarat could be due to poor health of those cattle and the development of secondary infections.

The Punjab government led by Chief Minister Bhagwant Mann has chalked out action plan for early prevention of Lumpy Skin...

Lumpy skin disease: Milk collection reduced by 3 to 4 lakh litre per day in this state